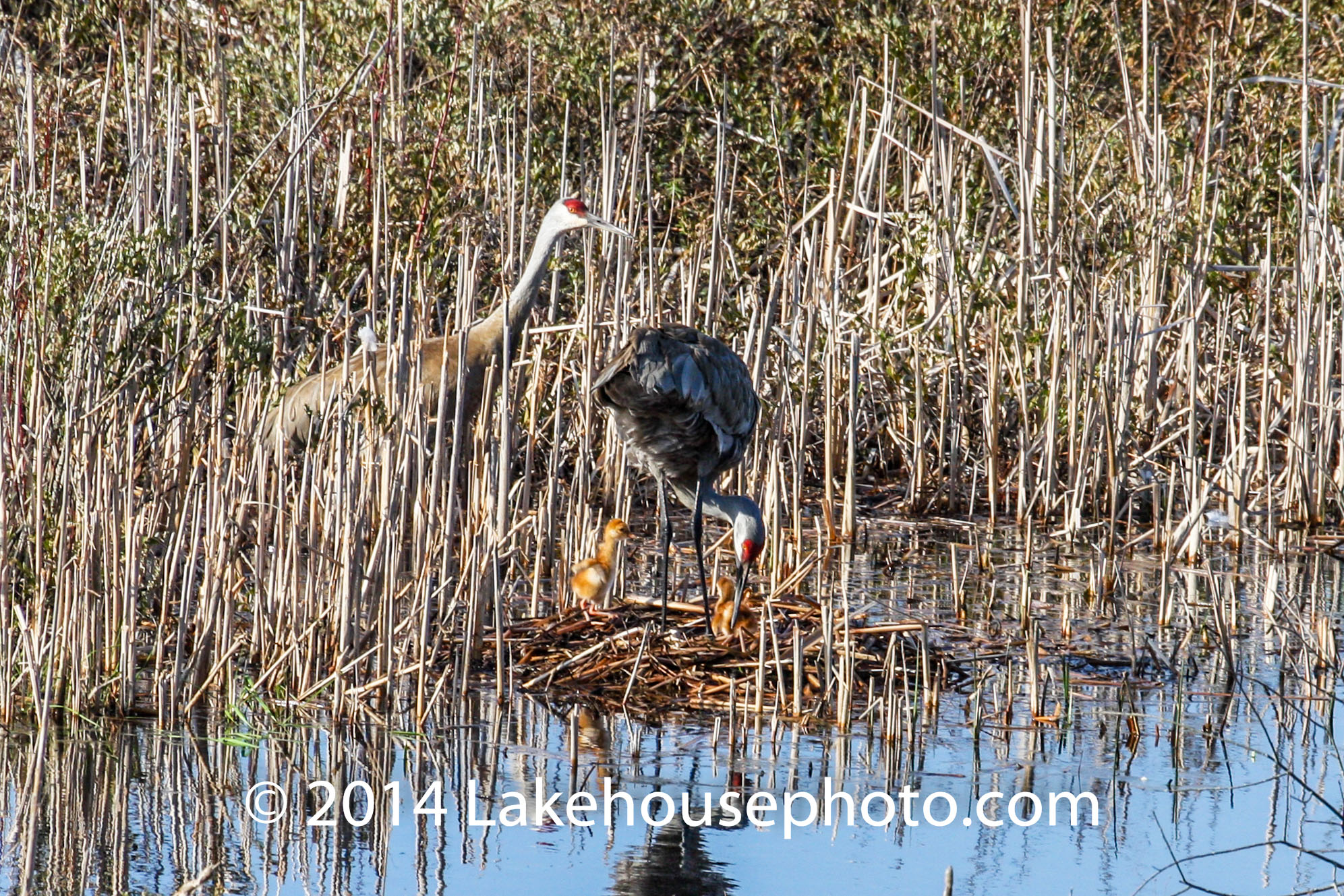 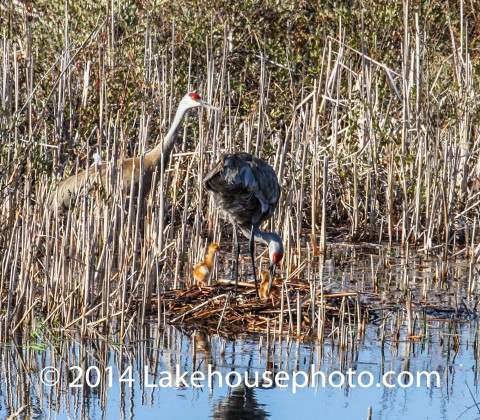 Sandhill Cranes of the Lakehouse

The day the baby Sandhill Cranes are born is one of my most highly anticipated days of the year.  On May 1st, I was awakened by Bud and Lydia trumpeting the arrival of this year’s brood.  Neighboring cranes replied, either to share in their joy, or to announce the hatching of their own families.  With heart racing, I jumped out of bed, and rushed to the backyard with camera in hand.  Sure enough, Bud and Lydia stood upon the nest with two little ones under foot.  I was beside myself with excitement and could barely hold the camera still.  Not only was I overjoyed by the birth of the new cranes, but also, that they had for the first time ever placed the nest in a location I could easily see and photograph.

As with all babies I have hopes and dreams for their future.  The first hope is that they live one day, then one week, and finally through the fall so that I might wish the whole family farewell as they fly south for the winter months.  If they make it through the week, they receive names.  Names are chosen based on behavior, birth date, or some other theme that is appropriate that year.  Here is a chronology from the time the time I lived at the Lakehouse.

2007 Roger, Lydia, and son David (David, after the real Roger and Lydia’s son)

2008 Roger, Lydia, & son Bud, and daughter Diane (Bud for a relative that loved nature and had passed away that day, and Diane after a relative born on that day)

2009 Sadly Roger did not return in the spring of 2009.  Lydia chose to mate with Bud, her son from the previous year.

2009 Bud, Lydia, & daughter Dori, and son Nemo (Born during a high water year, and survived for only a few days)

2009 Bud, Lydia, & sons Chance, and Rerun (The second brood of the year, thus named for the second go around.  Chance injured a wing late in the summer, and though I took him to the Wildlife Rescue Center in Grand Rapids. he did not survive)

2010 Bud, Lydia, & sons Trip and Mayday (Born on May 1st, the logical name for one would be Mayday, and the other.  Well he tripped on everything)

2011 Bud, Lydia, & daughters Corky and Cedar (Named after the parent company of Michigan’s Adventures where Tammy Sue worked , Cedar Point and the Corkscrew Rollercoaster).  Neither chick survived the summer.

2014 Bud, Lydia, & daughter Jut (Born on Mother’s day, she was given my mother’s childhood nickname)

Though many folks do not like Sandhill Cranes, I cannot help but be fascinated by them.  It is true that they destroy crops, landscapes, and lawns with their long sharp beaks, as they search for bugs and seeds to eat.  But I have no crops, and the little damage they do to my yard is not of consequence.  How can one not love a bird that stands nearly four feet tall, eats at the feeder, brings precious babies each year, and allows one to stand just inches away?  What a precious and unexpected gift I received when I moved to the Lakehouse!

Each year I am delighted by new and old observations.  Just this year I learned that the babies swim across open water.  Something I have known for some time is that each chick develops its own distinct personality though some themes remain the same year after year.  The boys tend to lean back on their knees when resting.  The girls sit down.  There is always the flapper.  This chick propels itself forward as it walks by constantly flapping its tiny wings.  Without a doubt, the flapper is the first one to successfully fly as fall grows near.  Then there is always one that is a bit lazy or sleepy.  This chick will take every opportunity to lag behind, sit down, or take a nap.  This chick’s first flight is never pretty.

Bud was a lazy/sleepy chick.  Still on occasion he reverts to old behavior and forgets that he is a dad and has responsibilities to the babies.  Bud’s first flight was the absolute worst I have ever observed.  His sister Diane had a picture perfect flight.  Roger and Lydia cheered her on as she glided from the nest to my lawn.  Bud followed up with a wobbly take off gaining a bit of altitude, then abruptly took a nose dive into the muck.  Though Roger and Lydia started off with the same enthusiastic cheer they had with Diane, they quickly fell silent during Bud’s ill timed decent.  Soon all four cranes were in my garden.  Diane, Roger, and Lydia, were obviously pleased, and ate happily at the feeder.  Bud, however, wet and mud covered, hung his head in shame, and would not come near to eat.

Sandhill Cranes mate for life and can live 20 years.  The first year of a crane’s life is the most difficult.  On the day the chicks hatch the adults compel them to leave the nest to forage for food.  The terrain they nest in is not easy to navigate, and I find it unimaginable to me,  as to how the little ones manage.  The nests are often surrounded by water that they must swim across.  Then there are reeds and cattails, sharp, bent and broken from the previous years, new sprouts of the same plants, muck, sticks, and fallen trees.  During the first year there are many predators the colts are ill prepared to defend themselves against including; hawks, eagles, fox, coyote, raccoon, snapping turtles and even cars.

The cranes have provided me with laughter, wonder, joy, and some sorrow.  In return there is so very little I can do for them.  I feed them, love them, cherish them, and adore them.  I hope that I can provide a safe haven that they will come home to year after year. I am painfully aware that despite my best efforts, I cannot guarantee that Rusty and Red will make it one more day, week, month, or until we say goodbye at the end of summer.  Each day I count, 1 baby, 2 babies, 1 adult, 2 adults, and am grateful and relieved that all are still here.  I cannot guarantee that Bud and Lydia will safely return each spring.  But I hope and I pray, and I wait each year for them to do so.  These are after all wild creatures.  They are not bound to me or to this place, but to their natural instincts.  I can only hope that these instincts will lead them home for many countless years to come. 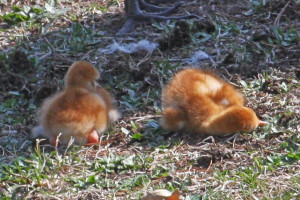 Rusty and Red – The day the sandhill cranes were born

For more photos of the Sandhill Cranes go to:  www.lakehousephoto.com