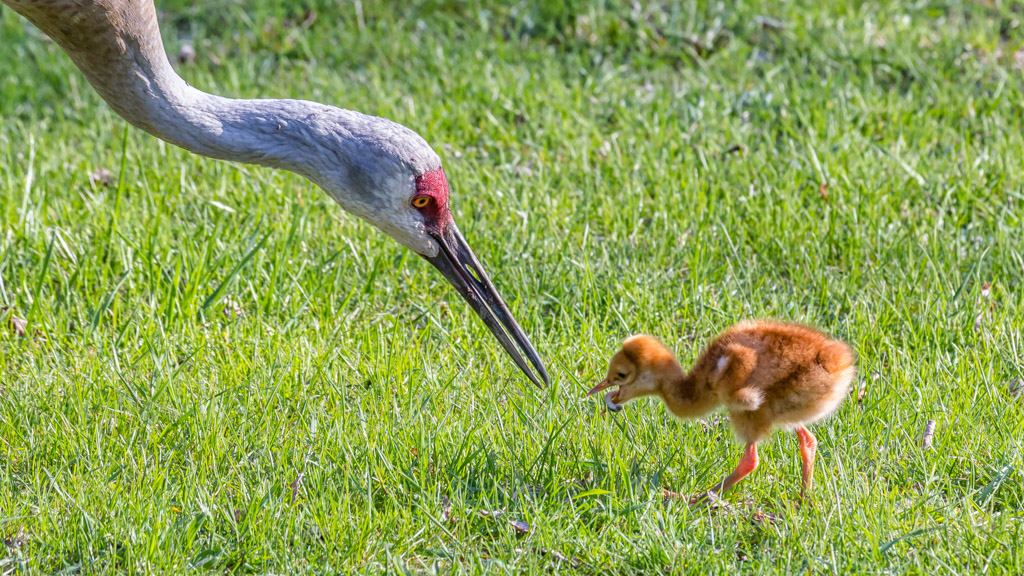 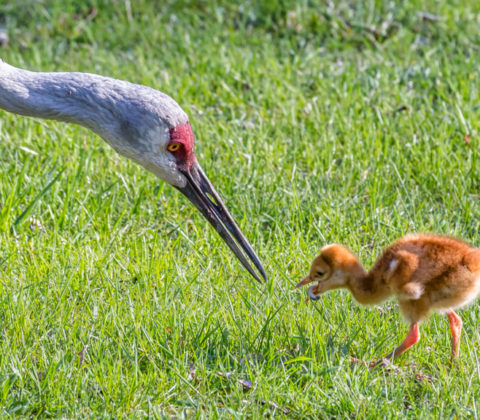 Hatchlings – The Day The Sandhill Cranes Are Born

The day the Sandhill Crane colts are born is the most highly anticipated of the year at the Lakehouse. On May 1st, 2013, I was awakened by Bud and Lydia, the nesting pair of Sandhill Cranes that lived on the marsh, trumpeting the arrival of the year’s brood. Neighboring cranes replied, either to share in their joy or to announce the hatching of their babies.

I jumped out of bed and rushed to the marsh with camera in hand, hoping to meet and photograph the colts. I was not disappointed. Two newly hatched chicks wobbled in wide-eyed wonder between their parent’s feet. I was overjoyed. The opportunity to photograph the cranes on the nest seldom occurs as the cranes most often select a more secluded location.

As with all babies, I have hopes and dreams for their future. Among the most basic is that they survive a day, a week, and then fly off in the fall with their parents. However, being born is not a guarantee of survival. The colts face many dangers from land, sky, water, and weather. Yet, with that much stacked against them, their very survival seems miraculous. Beyond that, I hope they will be healthy, find mates, and build their own families.

The Sandhill Crane colts receive names based on current events, behavior, or just on a whim. The colts of 2013 were named Rusty and Red due to their orangish-red coloration. Below, I have listed the names of all the cranes from past years.

Bud and Lydia would bring the colts to the yard daily. It is always fascinating to watch them grow from sleepy little walking birds to flying adult-sized ones when they leave in the fall. The babies are born about the size of a baseball and grow to be 3 1/2 to 4 feet tall. They lose their fluffy orange feathers and grow long brown feathers as the season progresses, much like their parents.

The physical appearance of Sandhill Cranes is very similar. There is no remarkable difference between an adult male and female, and all the colts look the same. Identification of the birds then indeed relies upon behavior. In the case of the Cranes of the Lakehouse, Bud always took a step away when approached. Conversely, Lydia came toward me and often walked inches away.

The colts, too, have distinct behaviors. Though I can’t know whether they are truly male or female, the colts display what we think of as masculine or feminine behaviors. For example, the more feminine bird sits on the ground while the more masculine leans back on its knees when resting. Additionally, when there are two colts, one walks with purpose flapping its tiny wings continuously. The other lazily wanders about and takes frequent naps.

Having Sandhill Cranes in the yard is a mixed blessing. Their call is loud and shrill, often untimely, and could wake the proverbial dead. In addition, the cranes constantly forage for food with their long beaks. They create holes in the ground and uproot and toss aside any newly planted greenery.

However, the antics of the Sandhill Cranes make the collateral damage tolerable. The colts, just like human children, pick fights with one another for no apparent reason. And, often, the parents express their frustration with them with a low chortle that says, you better behave. And, watching a colt eat its first grub is priceless. An adult will pass the insect from its beak to the colts. The colt will take the bug greedily but struggles as it swallows it whole. Once ingested, the grub is visible as it passes down the colt’s neck. When the live bug reaches the colt’s stomach, the colt will often squirm, shake, and run around aimlessly until it settles.

Bud provided one of the most memorable Sandhill Crane moments during his first year. He was a lazy colt. While his sister, Diane, was athletic and flapped her wings continuously as she walked, Bud lagged, causing his parents much frustration. It was the first flight day for the colts, and Roger and Lydia called and danced with encouragement as Diane took to the air. Her lift off from the marsh, flight, and landing in the yard could not have been more perfect—all of her wing flapping while afoot paid off.

Then it was Bud’s turn. Roger & Lydia again called and danced to celebrate Bud’s first flight. But, Bud was hesitant, and it became clear that he did not want to fly. Finally, he stumbled through takeoff, awkwardly flew twenty feet into the air, and stopped flapping his wings. Bud faceplanted in the muck of the marsh. Roger and Lydia flew to the yard to meet Diane. Thirty minutes later, Bud arrived by foot mud-covered and humiliated.

Now it is March of 2022. Billy and Rosebud have returned from winter migration. They have danced, mated, and found a nest. The easy days of spring are nearly over. Once Rosebud lays eggs, each bird will take its turn at the nest as the other takes a break to eat and stretch its wings. Then, about thirty days later, one or two colts will hatch. I can barely wait!

I hope you will join the adventure that this season will bring.

Sign up to receive notice of new blog posts at the bottom of the page.

Note: Hatchlings was originally written in 2013 as The Day The Cranes Are Born. This is an updated version of that post.