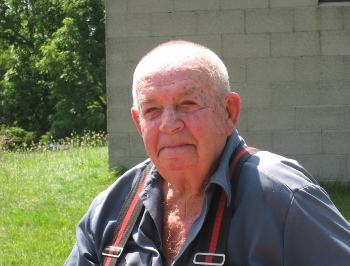 On September 7, 2014 by Gail Howarth With 0 Comments - Death, Parents, Spirituality

Today, I did a Dad thing.  It was not just a little Dad thing, but a classic.  It was one of those goofy things that you think you would never do in a million years.  I was so tickled with myself afterward, I wanted to call him and say; Dad, guess what I just did!  But of course, I cannot.  Though I often feel him with me, and even talk to him from time to time, it is not the same.  On this day though, if he could have replied, I know he would have grinned ear to ear and said; “Well now!  That’s my girl!”

So what did I do?  I fried my cereal.  That’s right!  I made little patties out of the slimy stuff, threw them into a frying pan with butter, and sprinkled them with cinnamon.  When the edges were crisp, I put them onto a plate, added a little more butter, and drizzled them with raw honey.  It was by far, the best thing I have eaten all week.

My father used to make something called cornmeal mush.  Just the word “mush,” was enough to keep me from ever eating it.  For those of you who may not know, cornmeal mush is cornmeal cooked in water or milk until it thickens.  Then, it is poured into a small cake pan to harden.  Once hardened, it is sliced and fried.

My father’s oil of choice was always bacon grease, but any cooking oil would do.  The key, for him, was that it had to be a lot of oil.  Enough, in fact, that it would, not only, generously splatter the stove top, but also, the wall behind, and the floor below.  After the mush was crisp, or perhaps, when it could saturate no more oil, he would put it on a plate, add an inordinate amount butter, and smother it all in maple syrup.  This left the end of the kitchen table both sticky and greasy.

My fried cereal did not resemble my father’s.  None-the-less, it was inspired by him.  First, it was Bob’s Red Mill Mighty Tasty Gluten Free Hot Cereal, not cornmeal.  After eating it in the form it was intended, I decided “Mighty Tasty” must have come from the marketing team, and not the taste testers.  Next, there was only a little butter in the frying pan.  Not even enough to splatter the stove top,  wall, or floor.  And lastly, raw honey was used sparingly, leaving no sticky residue on the table.

How many more “Dad things” will I remember and embrace as the years pass?  Too many to count, I hope.  No, I doubt I will take up hunting or trapping, or master cussing as he did.  But I am sure there are other softer gentler parts of him that I will rediscover.  I can hardly wait!

If you enjoy the photo in this blog please consider: http://www.lakehousephoto.com/